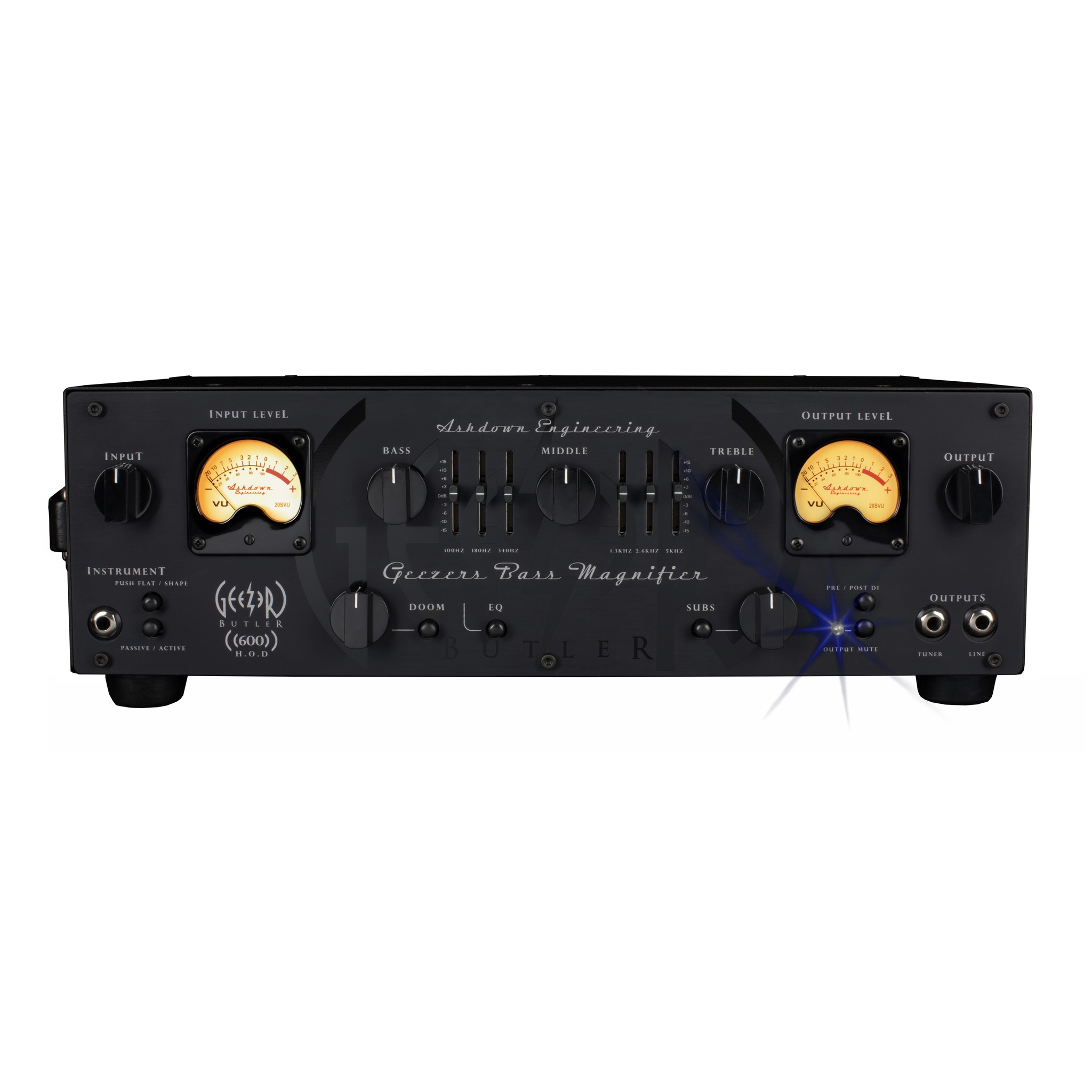 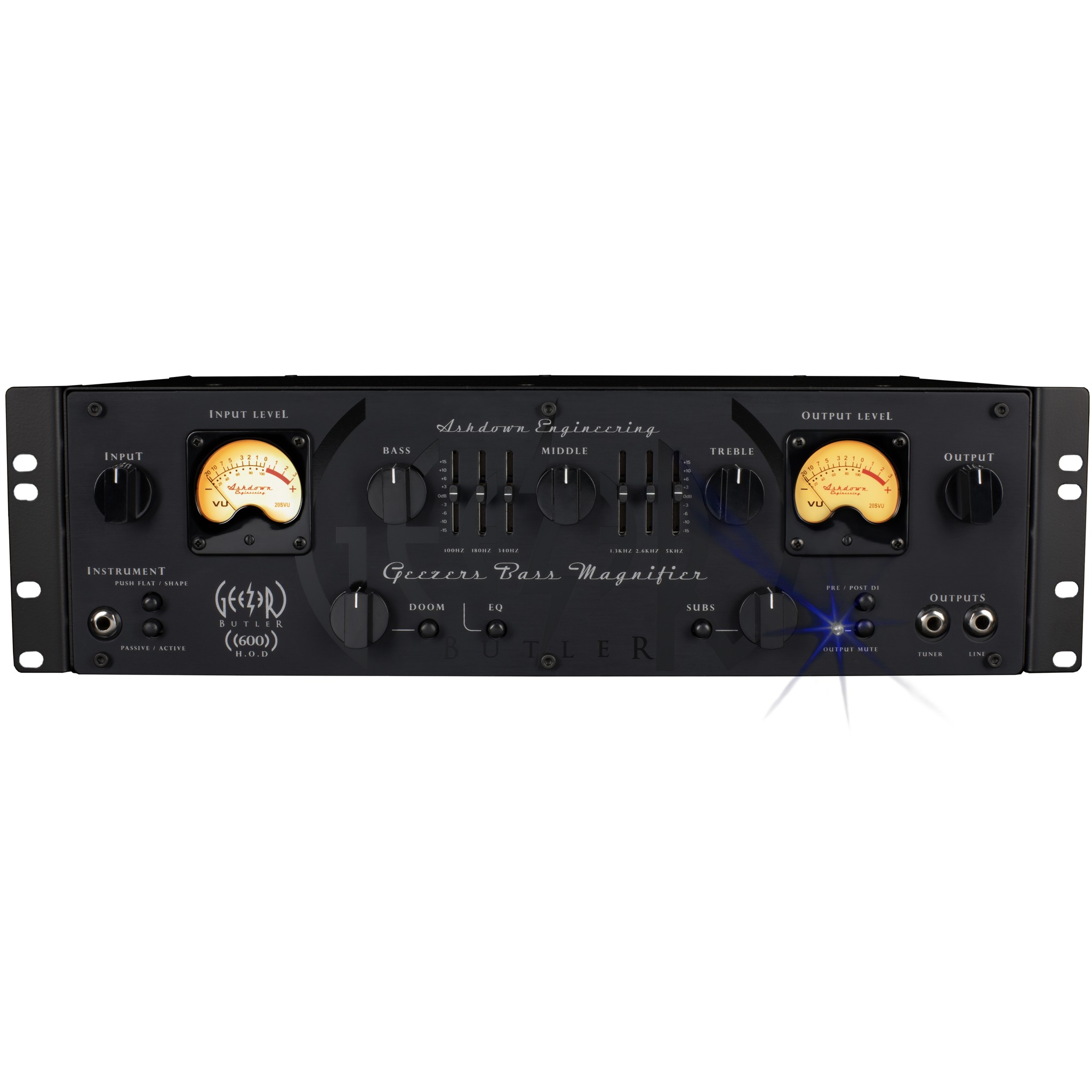 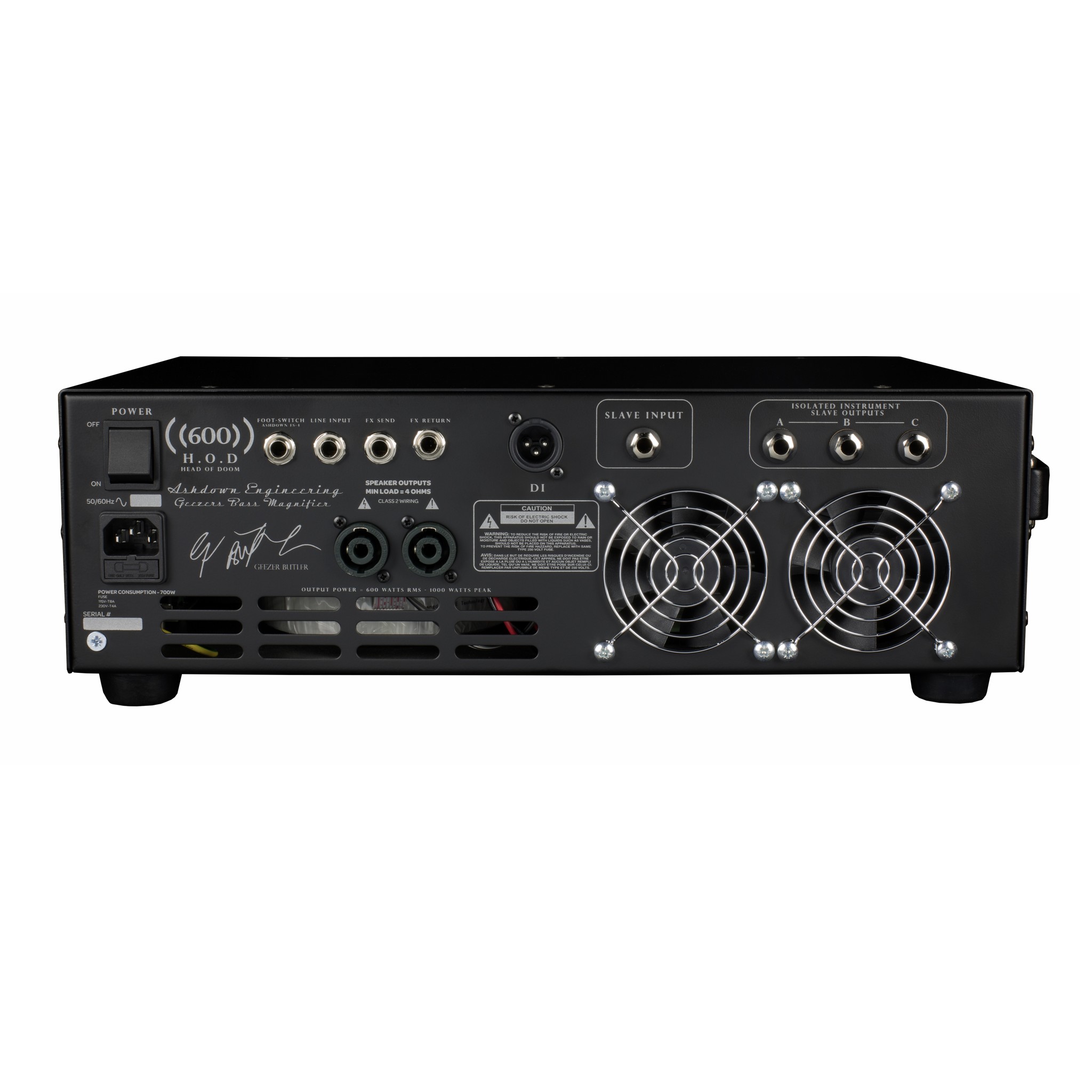 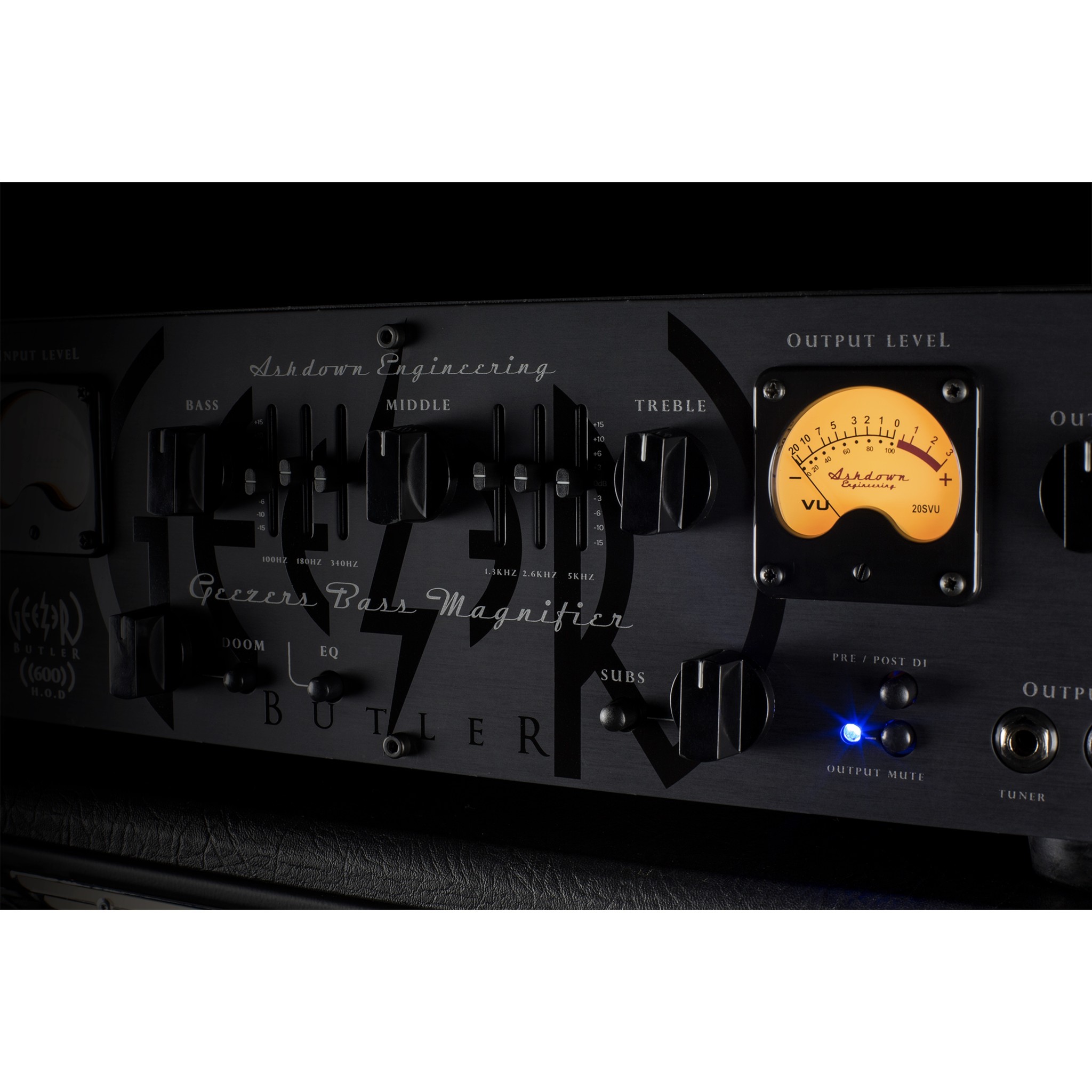 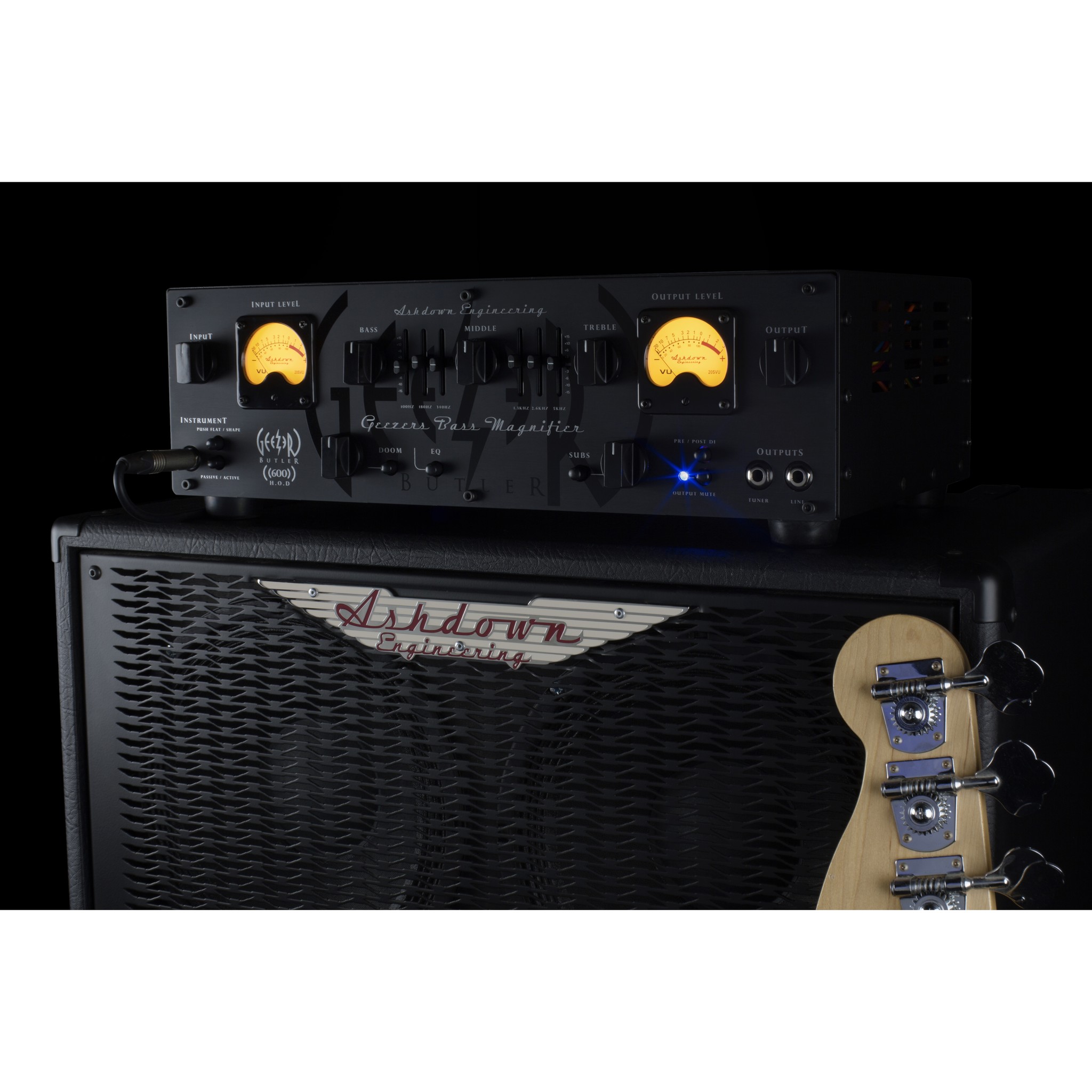 Ashdown wants you to know:

The Ashdown and Geezer Butler story began three years ago after extensive talks with Geezer’s long standing tech, Terry Welty. Black Sabbath’s ‘The End’ farewell tour was approaching and Geezer was extremely specific about his bass sound for the band’s departing tour. Ashdown designed a rig for Geezer to leave a bold statement with, encapsulating a music career spanning 50 years into one sound to remember the almighty Black Sabbath by.

The Head of Doom is for bass players who seek classic, driven bass tones with phenomenal power. Stripped back, the Head of Doom is built on Ashdown’s flagship ABM range; offering tried and tested tone and rock-solid reliability.

The Head of Doom features a sophisticated 9-band EQ, with familiar Bass, Middle & Treble controls and six sliders allowing precision cut and boost in the regions the standard controls can’t reach, providing a huge range of tonal variation and the tailring of the perfect tone.

The EQ can be switched in via footswitch taking the player from a flat fretless sound to their favourite EQ setting instantly.

Once heard – never forgotten. The Sub-Harmonic generator adds an octave below the notes being played bringing fullness to any bass part. The Sub level is independently controllable, thickening the sound and providing more DOOM to your tone as required.  Sub Harmonics are also controllable via footswitch.

This feature was added so Geezer could power his 12 on stage cabinets ensuring the quality of signal was maintained.

The Number of the Beast

The Head of Doom has a deadly power section rated at 600 Watts RMS with two Neutrik speakon outputs. The power section has a minimum load of 4 ohms. The slave input on the rear is designed to be fed by the transformer-isolated outputs if running multiple heads from one input source. More heads - more doom!

From the top, the Head of Doom features a single instrument input linked to a passive/active selector switch. The passive input option (switch out) is high sensitivity and high impedance to suit the output from passive basses.

Perhaps the most obvious feature on the Head of Doom is its twin set of VU meters - the first Ashdown amplifier head of its kind. Not only does the head look like a daemon on stage, the second VU meter allows for output level visual monitoring. Now bass players can find the sweet spot for their instrument via the familiar input level VU. From there the player can tweak their tone via an experienced 9-band EQ and use the shape control to further sculpt their tone, all the while monitoring the output level at the same time via the second VU.

The Head of Doom is loaded with connectivity. A tuner output, line out, transparent FX loop and a line input for the connection of an external sampler or sound source. Output muting cuts the signal from the DI output but leaves the tuner output ‘live’, allowing the player to tune up in silence.

A pair of Neutrik Jack/Speakon sockets with a minimum 4 ohm load provide flexible partnering options so that the Head Of Doom can be used to power a single 8 ohm cabinet, a pair of 8 ohm cabinets or a single 4 ohm cabinet.

The Head of Doom’s ins and outs continue even further, as mentioned earlier with three dedicated transformer isolated outputs with the option to slave from the dedicated slave input.

The ‘Doom’ control increases the current to the amp’s 12AX7 pre-amp valve stage, like voltage through an electric chair, resulting in the richest harmonic distortion designed specifically for bass guitar. Used in conjunction with the amps impressive EQ section, there isn’t much this amp can’t deliver.

The Doom level control can be pre-set and kicked in and out via footswitch.